Monday morning and the indexes are off slightly. TLT is plus almost 1%. @CL is -2% and Vix.x is +3.5%. That is a pretty negative premarket. Much more negative than the indexes show. It would not surprise me to see a move lower this morning. We had quite a runup last week and the market is due for some consolidation. 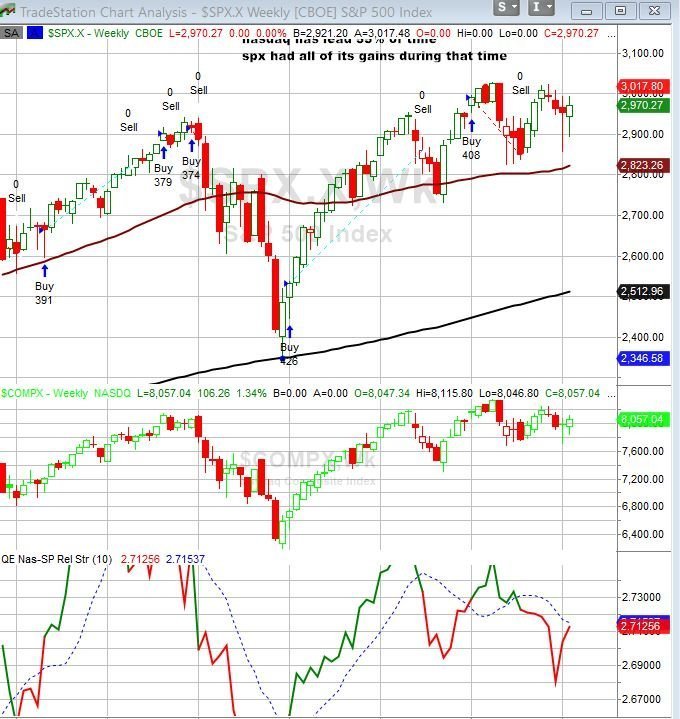 As you can see the Weekly QQQ is close to crossing over the weekly SPY. Typically most of the money on the long side is made when the QQQ leads. It’s a good indicator to keep a watch on.

The only question will be is how far up the chain do they go? At the very least I expect Brennan, Clapper, and Comey to get indicted. McCabe if he is not cooperating. And any others who have not become government witness’.

The only thing that remains to be seen is if they go after Obama, members of the Mueller team and some in Congress both on both sides of the aisle.  It should be interesting.

In the meantime the hysteria of the day is Syria. If you are basing your opinions on the media and what politicians are saying you have not learned your lesson yet. The entire issue is complex, and what you are being sold is far from the truth. It is beyond the scope of this article to get into the details, but suffice it to say, find some people that know about the issue, rather than propagandists and political hacks. Many of the politicians that are hysterical about Trump’s new Syria policy are the same ones that were hysterical about his being there.

The rally last week was for the most part precipitated by the China Trade deal. It looks like at long last there will be some kind of deal. Just think of Congress would do its job and pass USMCA. Odds are 6/4 against if you can believe it. The Dems are flirting with extinction at this point.

Finally, let’s take an updated look at the political odds:

Trump to get the Republican nomination: 77/23 +3pts

This is more of what reality is then what you read in the media. Watch these numbers to at least get some take on reality. Now, these are far from perfect. But much better than the media.

Two wagers I made:

Which party will win LA governor’s race? I laid 57/43 on the Republican. I viewed the odds at around 2 to 1 in favor  of the Republican

Expect more volatility in the markets, as there will be many surprises as we approach the IG report.

Markets Monday morning, IG report Friday, Syria, Updated political odds. My thoughts for a Monday morning.2019-10-142019-10-14https://www.rickjshandicappingpicks.com/wp-content/uploads/2016/08/ricklogo.pngRickj's Handicapping Pickshttps://www.rickjshandicappingpicks.com/wp-content/uploads/2016/08/ricklogo.png200px200px
About
RICKJ
This is author biographical info, that can be used to tell more about you, your iterests, background and experience. You can change it on Admin > Users > Your Profile > Biographical Info page."

RickJ's Handicapping Picks  The latest in positive EV handicapping Techniques Overnight Plays in MLB are sent out around 3 to 4 PM PST the day before Come join us for a fun and profitable Pro Sports season!!!
Sign up now for our newsletter with handicapping tips
Close
Posting....
Indexes up 1% premarket, updated Trump impeachment and conviction odds, Dems strategy. My thoughts for a Friday morning.INVESTING
Markets slightly higher Tuesday, China, Schiff’s star-chamber, updated political odds. My thoughts for a Tuesday morningINVESTING