One thing to notice is that this upswing has been slightly coordinated with a positive Vix.x change. There are a lot of theories as to what this means. Myself, there is enough randomness in the markets that I look at things like this as variables. Similar to the way I have variables in sports handicapping.

All they do is create a bias, they alone are far from conclusive. Ideally, you want to have a number of variables like this to go by.

Now I have talked about the QQQ/SPY ratio. I learned this from Rob Hannah at 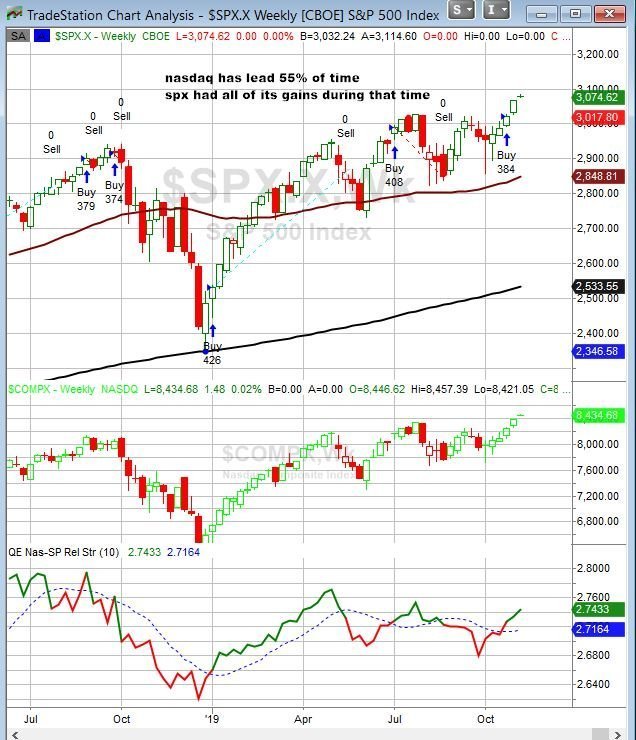 Notice the trigger dates and how they correspond to gains in spy or QQQ.

We had elections yesterday in a few states. I had the Kentucky governorship as a wager and as I explained yesterday I sold my shares for a profit. I did the same with LA. I kept Mississippi and the Republican won easily.

So now I am left with the Giuliani wager and have close to a 10% gain on that wager.

So far I am batting 100% on my wagers including the settlements.

You will hear a lot of spin on Kentucky. Do not believe a word of it. The Republicans crushed Kentucky with the exception of the governorship. And as of this morning, the outcome of that race is still up in the air.

The loss the Republicans took was in Virginia. I have not analyzed that one, but the lost both houses in Virginia. I will have to take a look to see what happened there before I draw any conclusions.

We are still on hold waiting for the IG report, Barr, Durham and Huber. If you are waiting on impeachment, do not bother. It’s almost a certainty that the House will impeach at this point. Not everyone agrees with that assessment, but that is how I see it.

The importance of this is how it affects the markets. I expect an initial dip. What you need if you could would be to have a window into how Schiff, and others in Congress make trades. Once they start going short or selling shares you know it is on the way. Sort of like following insider trading:) I assure you they are trading prior to key announcements.

Now onto the political odds this morning:

Here are the political odds this morning:

Trump to get the Republican nomination: 78/22 +2 Pts (Another one to watch)

I am about there on the Giuliani wager but the wagering is light and I have 1219 shares. So it will not be easy to lay it off. But I, of course, can leg into it.

I won MS and settle KY so the only wager I have going now is the Giuliani wager.

Have a great day trading:)

Indexes flat premarket, Election results, QQQ/SPY ratio, updated political odds. My thoughts for a Wedn Morning2019-11-062019-11-06https://www.rickjshandicappingpicks.com/wp-content/uploads/2016/08/ricklogo.pngRickj's Handicapping Pickshttps://www.rickjshandicappingpicks.com/wp-content/uploads/2016/08/ricklogo.png200px200px
About
RICKJ
This is author biographical info, that can be used to tell more about you, your iterests, background and experience. You can change it on Admin > Users > Your Profile > Biographical Info page."