Indexes slightly lower, Bloomberg, The Countries firewall is short on time, updated political odds. My thoughts for a Friday morning.

This to me looks like a range day with the potential of a pullback.

Unfortunately, all you can do is make an educated guess where the markets are headed:) There is no certainty in all of this.

My two swing trades are still on with Short FXE and Long TLT. I did get an exit signal on FXE and will get out on the open. TLT no signal yet.

The stock market is very overbought here. Any bad news will send this market lower. But for now, it is up every day:)

Not much in the news. Bloomberg is thinking about entering the fray as a Democrat presidential candidate. If he were to get the nomination the progressive side of the party would revolt.

I am in a pretty down mood this morning, as I have come to the conclusion that the U.S. is in trouble.

I have no political ideology. I call it as I see it. I voted for Obama in his first term. I am not dogmatic on any issue. I even ran as a Democrat a long time ago in a local race:)

But what I am observing now in the U.S. is the fabric of the society falling apart. The country is divided, the politicians are corrupt, laws are being selectively enforced on a political basis, half the country is brainwashed. So what is the prognosis? Not good.

I know many are thinking Huber, Durham, and Barr are going to come in and save the day with indictments. But remember, 2020 is an election year. Unless they plan military tribunals, the criminal justice system takes a long time to get through the process. If Trump loses in 2020, all prosecutions will be dropped, they will attempt to destroy Trump and his family.

If you think the proceedings in the House are scary, wait until you see what happens if Trump loses.

I think what you are seeing now is what John Adams predicted: 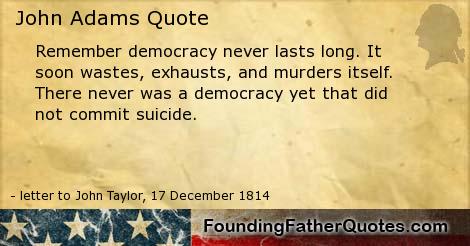 In the long run, this does not bode well for the markets. Short term, however, it is just something to keep a watch on. You can protect yourself by not being in debt, And staying mentally healthy. There will be some challenging times coming. It is around the corner.

Let’s take a look at the political odds this morning:

Trump to get the Republican nomination: 78/22 +1 Pt (Another one to watch)

KY Governor’s race 96/4 Democrat I laid 65/35( I sold this out before the election for a 15% gain) This is still considered too close to call, a Recount is in the works.

The only change was Bloomberg into the picture. So far the Senate is holding firm on no conviction. That is the line to watch at this point. Personally, I think there will be some drama in the Senate. I do not think Trump will be convicted but knowing the politicians they are all drama queens. So expect some nail-biting if you are a Trump supporter.

Have a great day trading:)

Indexes slightly lower, Bloomberg, The Countries firewall is short on time, updated political odds. My thoughts for a Friday morning.2019-11-082019-11-08https://www.rickjshandicappingpicks.com/wp-content/uploads/2016/08/ricklogo.pngRickj's Handicapping Pickshttps://www.rickjshandicappingpicks.com/wp-content/uploads/2016/08/ricklogo.png200px200px
About
RICKJ
This is author biographical info, that can be used to tell more about you, your iterests, background and experience. You can change it on Admin > Users > Your Profile > Biographical Info page."

RickJ's Handicapping Picks  The latest in positive EV handicapping Techniques Overnight Plays in MLB are sent out around 3 to 4 PM PST the day before Come join us for a fun and profitable Pro Sports season!!!
Sign up now for the service. Its free until NCAA FB starts.
Close
Indexes up 1/2 point pre-market, Twitter Stock, State blacklists, House hearings, Grand Jury and update political odds. My thoughts for a Thurs Morning.INVESTING
Indexes red, Star chamber goes live, How can this be happening, Updated political odds. My thoughts for a Monday morning.INVESTING