We are at the 76.5% retracement and also at a short term resistance area. 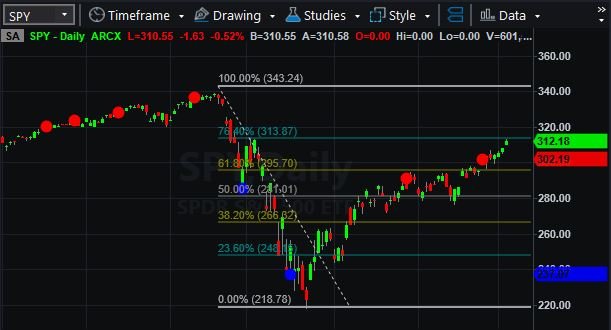 Overall this looks like a small gap down, but I would not expect it to pick up much steam to the downside without any surprises. The Fed is flooding liquidity into the market. In addition, the markets are forward-looking and do not necessarily reflect the facts as they exist today. Thus, The Covid is behind us for the most part, the rioting should subside, the economy might slip technically into a recession however it will be very short-lived.

Also, the markets are building in not only the Fed staying accommodative, but also a Trump win in November. If Trump were to lose or be removed this market will take a nosedive that no one has seen in their lifetime.

The reason is simple a Trump loss would mean higher taxes, higher regulations which were the cause of the economic stagnation we saw under Obamas 8 years. But this time would be much worse, as the Dems would rush to reverse everything Trump has done to move this economy.

Of course, Covid has hit the country hard. Much most of the wounds have been self-inflicted.

So the death toll should have been much lower. But some Democrat Governors would have none of it. And the end result is 80% of the Covid deaths are in Democrat states. With about 50% in nursing homes.

The number could have easily been cut in half, which would have made it far less of a risk than the ordinary flu.

That is how off the rails politics has become. Your life expectancy in a blue city or state is much less than a Red City or Red State.

But that is now past, and if anyone can bring the economy and jobs back its the person that got the U.S. to all-time records numbers in a very quick fashion.

Saying that the odds are now in Bidens favor of winning in November. Biden is a 55/45 favorite which is right where I place my wager on Trump.  I suspect Trump may well lost in November when you consider the 24/7 negative news media, and the rampant voter fraud. In addition, many Republicans are self-destructing in front of our eyes. The Senate is a disgrace.

So, the President has his work cut out for him in November. Remember, we had Russia, Russia, Russia, , then Ukraine, then Covid, and now rioting over someone killed by the police.  These riots just like the proceeding reactions to the events are all orchestrated to try to bring Trump down in November. I suspect something else will be next.

Humans can only take so much before they are finally influenced by the media spin.  Human’s track records on voting is abysmal. So while logically I would expect a Trump landslide, knowing human nature anything might happen.

Myself, I have a portfolio of mostly high yielding instruments. I have been back to some swing trading, as the markets are looking reasonable now. And with sports pretty much in limbo my time has been available to take a look at some high % strategies for trading options.

The one I am using now is selling cash-secured puts on Thursday with a Friday expiration. This technique, with my filters, backtested out so well, I have been trading it now for a few months. 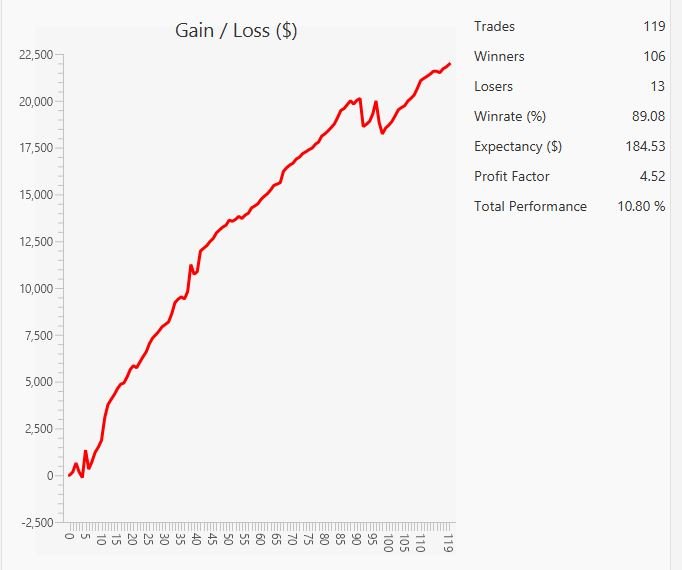 That is quite a graph:)  Much better then any other trading or handicapping method I have come up with by far.

I give these trades out to all my sports subscribers for free on Slack. You have to be a subscriber to the sports service, however, all subscribers subscriptions are on pause pending the start of the MLB season. So, you can get these trades by subscribing on my web site under the PayPal menu with a monthly subscription.

To get these trades for free until then all you need to do is :

In addition, you are free to ask any questions on slack at any time on any subject.

So you will get these trades and all my other swing trades for free until sports starts up. Then you can decide if you wish to continue.

Now, let’s take a look at the political odds:

Its looking more and more like its going to be Biden. However, do not rule out something strange happening at the Dem convention:)

It’s looking more and more like Harris. However, Harris does not help him one bit. Biden already has Ca. And the idea that Harris is female and an African American does not outweigh her negatives.

I Still like Trump at even money or better. The media has again portrayed a race where trump is understated.  The base has not left him but gotten stronger, and independents are flocking to the Republicans after seeing what Dems are doing to their states and cities. The backlash logically should be breathtaking.

Again I believe the value is on the Republicans

Getting 4 to 1 is turning out to be the best overlay on the card right now. Someone must know something that I do not know, but, I do not see how much has changed for the House members that are in Trump districts. If anything they have gotten worse. Another good wager is to bet against each of the “dirty 30”

50/50 in favor of the Republicans No Change

I actually think the Republicans could lose the Senate. Collins has self-destructed, although they will pick up Alabama. But in Georgia establishment, Republicans are making the same mistake they made in Alabama in 2018. Loeffler is damaged goods with insider trading. Collins, however, is a cinch if he gets the nomination. But the establishment is pulling out all stops to defeat him in the primary.

Add that to some of the policy-making decisions of the Republican Senate and they are not very popular. They only have a 3 person advantage in the Senate. So, I view the Senate race right now as a tossup, only because the establishment Republicans are making bad decisions while undermining Trump in the process. Collins is the prime example. It is almost like she is throwing her seat to the Dems.

I would still bet on the Republicans but the much better wager is taking the odds in the House for value.

Odds of a recession during Trump’s first term: 96/4+1 Pts my wager taking 4 to 1 Right now it is looking grim for my wager. Although the technical recession will be very short-lived.

The best wager of the year will be fading the dirty 30 in the House. They are all incumbents, and all will most likely be +odds. So you only need to go 50% to make money. I cannot imagine not hitting 60%+ on these.

That’s it for today,

Market slightly down Thurs AM, Market forward looking, Covid self inflicted wounds, a 90% winning naked put sale technique, updated political odds. My thoughts for a Thursday morning2020-06-042020-06-04https://www.rickjshandicappingpicks.com/wp-content/uploads/2016/08/ricklogo.pngRickj's Handicapping Pickshttps://www.rickjshandicappingpicks.com/wp-content/uploads/2016/08/ricklogo.png200px200px
About
RICKJ
This is author biographical info, that can be used to tell more about you, your iterests, background and experience. You can change it on Admin > Users > Your Profile > Biographical Info page."