Markets gaping down 2.5%, Coronavirus in perspective, media hysteria and what motivates it, updated political odds My thoughts for a Tuesday morning

You have to be very careful if you are overnight trading. Day trading is fine, although few succeed at that. Best to leave the trading for the professionals and wait until things settle down.

Myself, I have been through this so many times and weathered so many ups and downs, it hardly phases me. But I still do not enjoy it much.But it comes with the territory.

That looks to me like a negative premarket:) This is after a positive day of over 1000 pts in the dow.

I attribute most of the volatility to the hysteria caused by the politicians and the media. Its been one hysteria after the next. From Russia, Russia, Russia to Ukraine, and now onto the Corona Virus.

The left is going to tank this market and the economy come hell or high water. And make no mistake that is their intention, combined with their partners in crime some of the countries that helped Obama in the coup against Trump. Then through in Iran and China into the mix.

One thing they all have in common is they want Trump out in 2020. So it’s just a question whether the voter will see through all of this or not. The betting odds now are a tossup, which considering the news coverage is astonishing.

This new hysteria is all manufactured in my opinion. Yes, there is a Corona Virus. Yes, it most likely started in China. But does it warrant the hysteria we are seeing?

Let’s look at what an MIT PHD in Biological engineering has to say:

Dr.SHIVA Ayyadurai, MIT PhD. Inventor of Email
@va_shiva
As an MIT PhD in Biological Engineering who studies & does research nearly every day on the Immune System, the #coronavirus fear-mongering by the Deep State will go down in history as one of the biggest fraud to manipulate economies, suppress dissent, & push MANDATED Medicine!

Let’s look at the numbers: 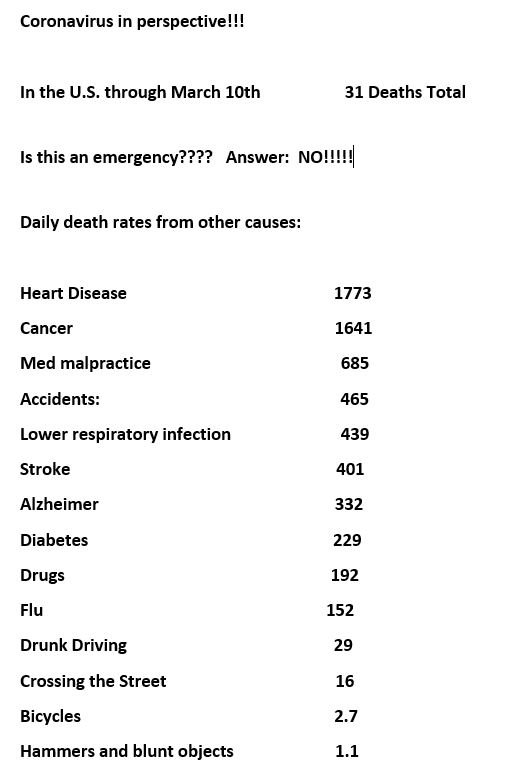 I mean 31 deaths total through yesterday, compared to the daily totals as seen in this report. To me, it’s a certainty that all this chaos has been manufactured to take down the markets and throw the US into a recession. 31 deaths and you would think ebola was spreading like wildfire across the nation. Reality is the ordinary flu each year causes 30,000 to 60,000 deaths in the US.

But if you are a trader you have to deal with how the public perceives things. And right now this ginned-up hysteria is taking its toll on the markets. So, you have to make your decisions based not upon reality but upon how others view reality. And right now, others for many different reasons are pushing this lunacy.

I got long a number of stocks yesterday afternoon and had nice gains at the close. Those gains will evaporate this morning. I will want to watch the trading before I decide what to do by way of exits. I typically do not sell on large gaps down. Why? Because that is when the public is selling and usually you want to be doing the opposite of what the public does.

What it comes down to is whether the forces against Trump will be able to use this to throw the economy into a recession, and thereby hurt his chances in November. Interest rates are low, unemployment is low, America is in a good position to weather this storm. However, the size of the forces trying to move the US into a recession are powerful. Don’t underestimate their power, and they are in a cannot lose position. Trump gets another 4 years, and many of them will end up in prison.

So, it will all come down to two things on November, 1. The voter 2. voter fraud. If #2 was eliminated I would say Trump was a sure thing to be reelected. But I see very little being done to minimize voter fraud. So I expect the race to be close. A tossup right now seems to be the right odds to me.

Trump has been hurt badly by Sessions. And Barr right now so far is not doing him any favors. He is allowing the criminals to roam free and cause havoc. Ultimately this may be the difference. And I assure you if Trump loses they plan on giving him the Flynn treatment. The southern district of NY will have a dozen criminal lawsuits ready to file against him.

This is American politics. And it’s getting worse each day. But on the bright side, if you are a Trump supporter, he has overcome everything they have thrown at him. I suspect he still has plenty of fight in him.

So the trend is for the Dems right now. I plan on fading the dirty 30 when the odds are posted.

The presidential election is a toss-up and that is down from 57/43 in favor of Trump.

An interesting primary is in Alabama where Tuberville is 9 to 1 to beat Sessions. That seems about right as Trump has endorsed Tuberville. That kills the theory that Sessions is a white hat. There are only three possibilities now regarding sessions. 1. He was complicit in the coup 2. Blackmail or 3. threatened.

Remember even if he felt the need to recuse himself, he should have resigned to let Trump get his own AG in that could do the job. The IG report showed that the Mueller investigation should have been finished within a week not to mention the FISA abuses. This was all under Sessions’ watch. No excuse for him letting this happen.

I will be sending out any trades I make via Viber to subscribers to my sports service. This is making for busy mornings for me but that is the way I like it.

Markets gaping down 2.5%, Coronavirus in perspective, media hysteria and what motivates it, updated political odds My thoughts for a Tuesday morning2020-03-112020-03-15https://www.rickjshandicappingpicks.com/wp-content/uploads/2016/08/ricklogo.pngRickj's Handicapping Pickshttps://www.rickjshandicappingpicks.com/wp-content/uploads/2016/08/ricklogo.png200px200px
About
RICKJ
This is author biographical info, that can be used to tell more about you, your iterests, background and experience. You can change it on Admin > Users > Your Profile > Biographical Info page."

RickJ's Handicapping Picks  The latest in positive EV handicapping Techniques Overnight Plays in MLB are sent out around 3 to 4 PM PST the day before Come join us for a fun and profitable Pro Sports season!!!
Sign up now for the service. Its free until NCAA FB starts.
Close
Posting....
Markets gaping down almost 7%, Is it time to buy, Corona-virus, updated political odds. My thoughts for a Monday morningINVESTING
U.S. market limit up!!!, Corona Virus in perspective, updated political odds. My thoughts for a Friday MorningINVESTING