A pretty neutral look for the market about 2 hours before the open.

From an overall standpoint, the market has had a V-shaped recovery, fueled primarily with massive liquidity by the Fed and also by Congress. It’s difficult to fight the fed and even more difficult to fight Congress giving away handouts. But still, there are headwinds to think about.

The American economy is far from out of the woods. The Blue States continue to shut down their economy which is going to put a damper on the recovery. The massive rioting and looting are taking its toll. The political dysfunction is getting worse and I expect it to continue at least until the November elections.

The rhetoric is geared at provoking riots and violence. Combine that with the paid agitators on the ground, a complicit media, and its a recipe for more civil unrest.

Make no mistake that is a wildcard you have to be thinking about if you are investing in the markets.

So how do you factor in a variable like this into your trading? I like to quantify things and my expertise is quantifying what is unquantifiable:) While the math wizards can do any kind of analysis they want with numbers, what I quantify cannot be put into a computer. That is how I approach handicapping anything, whether it sports or politics. It is the one edge I have over the math-oriented types.

Now, it’s not that I am not math-oriented. But, I have friends that can do things with their mind alone with math that would make your head spin:)  I am not one of those types. I have been around them all my life. Many have been bridge partners of mine, many have played across from me at the poker tables. So I know them well.

To make this short, what you have to do is recognize the headwind, acknowledge that it is going to create uncertainty, and adjust for it in your position sizing and the duration of your trades.

For instance, if you are inclined to short puts for income, I would avoid puts right now that are timed to expire after the presidential election. I would stick to pre November Puts. The same would be true if you are a covered call trader.

The reason I say this is November has the potential to be a monumental market-moving event. This could come about either from who wins the election or the chaos that ensues just prior and after the election.

Depending on the price you could even consider a straddle going into the November elections:) I rarely consider straddles because you are giving up vig on both ends. It is similar to playing middle in sports. It’s bad enough to pay the vig on one end, but on both?

One chart I look at is the QQQ/SPY chart. Almost 100% of the gains in the Nasdaq comes when the Nasdaq is leading SPY. Here is where that chart stands as of the close on Friday. 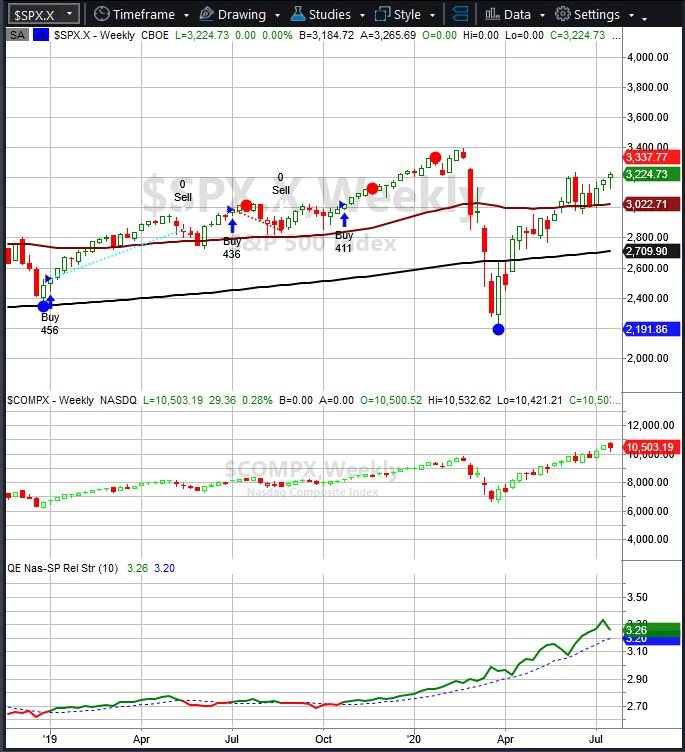 Several things to note. QQQ triggered a buy signal in early October and has never looked back. It triggered at 3020 and QQQ has gained 204 pts since then. Although you have had to sit through a massive drawdown to 2192:(  Despite the drawdown the fact remains that this is a pretty good guide as to when this rally might correct in earnest. As you can see we are still aways from that happening. But I will be watching it closely.

My short put trades I send out Thursday for expiration on Friday are still strong. I now have over 150 trades with a 90% win rate and a profit factor of 2.91. We had our biggest drawdown to date two weeks ago when we saw one of our stocks delisted and dropping 50% on the open. But as you can see from the chart we are still in a solid uptrend on this technique.

All of these trades were sent out in real-time to subscribers of my handicapping service on Slack. Its a side benefit to being a subscriber to rickjshandicappingpicks.com.

That is essentially where we are in the markets 90 min before the open.

As you know MLB starts in a few days. If you have any interest in joining us, remember you also get my trades in real-time also via slack.

To subscribe just go to rickjshandicappingpicks.com. Pick the $49.00 a month subscription and subscribe. It comes with a free day free trial. The subscription will not be active until 7/23 as I will pause it until then.

If anyone has any questions you can email me or connect with me on slack or Skype. My user id on skype is riccja and slack RickJ.

Markets mixed and hour before the bell, QQQ/SPY chart, Cash secured short put trade results, MLB plays this week! My thoughts for a Monday morning2020-07-202020-07-20https://www.rickjshandicappingpicks.com/wp-content/uploads/2016/08/ricklogo.pngRickj's Handicapping Pickshttps://www.rickjshandicappingpicks.com/wp-content/uploads/2016/08/ricklogo.png200px200px
About
RICKJ
This is author biographical info, that can be used to tell more about you, your iterests, background and experience. You can change it on Admin > Users > Your Profile > Biographical Info page."