It has been awhile since I posted anything regarding political odds here. Primarily the reason was the stopping of the count in the November elections with the fallout resulting from that.  Betting on politics has introduced a new variable into the equation:  Voter Fraud.

Now some deny it exists while others point the finger at both parties. Needless to say , without coming to any conclusions either way, it is a variable that has to be considered.  From a gamblers perspective, ignoring it completely would put you at a big disadvantage. But for the astute gambler, and one that can use some critical thinking, this variable can be a very valuable one if given the correct weighting in your bag of tricks to find value.

With that in mind lets take a look at some of the odds on Predictit.org this morning:

And before I begin I have one wager working right now, I laid just under 6 to 4 that Walker would win the Senate race in Georgia. Now any of my wager may or may not reflect my position on the race. But rest assured it does reflect my opinion on where I think the value is based upon the line.

That race is an interesting one as arguably Georgia is a red state, yet two Democrats are in the Senate with a Republican Governor and Republican Secretary of State. So, the obvious question is why is 2022 going to be any different then 2020 for Georgia.

I am going under the assumption that one or both of the Senate seats were lost because the establishment GOP decided that was a loss they were willing to take to rid themselves of Trump. Collateral damage for lack of a better word:)

This time around Trump is not on the ballot as its the midterms. And if he was , the race would most likely fall to the incumbent.  But, this time around, Walker appears to have the edge. How much of one. If I were putting out a line I would have made it at least 4 to 1 in favor of Walker. He is very popular in Ga, and that carries over across party lines. His opponent got the benefit of a Republican establishment that was going to do whatever it took to make sure Trump did not get a 2nd term. Now, they might just concentrate on getting the Senate back. But with the Establishment Republicans as we have seen anything can happen. Their innate ability to self destruct is like none I have ever witnessed before.

But McConnell has thrown his support behind Walker, and that is that. So, the roadblocks that existed before are gone.

There is much more to the analysis, but that is my short version. The person I wagered is a die hard liberal, who when you discuss political issues with him, you would swear you were listening to a CNN commentator:)  But saying that he is one of my best friends, and I have known him ever since I moved to Vegas. One of the few here that has some semblance of a heart.

In any event, that does not prevent me from wagering with him. We are both gamblers, and enjoy the wager.

I view Walker right now as the best value on the board at the moment. I would not be surprised to see the line at lest 80 /20 by election night.

Now lets look at some other lines:

Presidential Nominee for the Republicans:

Personally I would rather wager on whether Trump will run in 2024. I would put the line out at 3 to 2 he does not run. Perhaps higher.  And DeSantis, I am not sure what his intentions are at the moment. Of course anyone of the ones below them would run in a heartbeat if given the opportunity. So right now this is a line I am staying away from. I want to wait until Trump decides yea  or nay. And let me add , it is not a given he will endorse DeSantis. One thing is certain however he will not be endorsing Pence:) 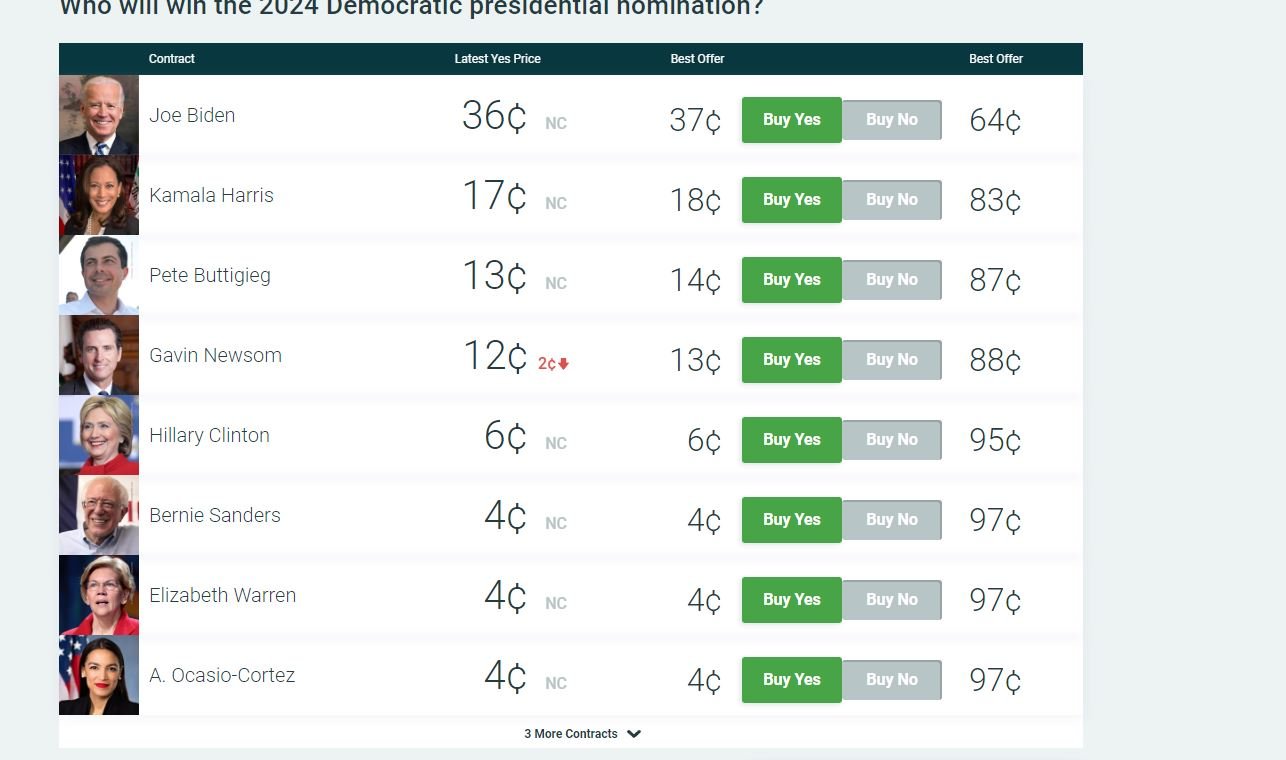 Again I would rather wager on whether or not Biden runs in 2024.  My line is 8 to 1 he does not.  Other then that this is one that is crapshoot right now. Just too much going on to come up with an intelligent idea of what the lines should be.

Next we have the GOP a 88/14 favorite to win the House in 2022.  I would not lay it, but absent something very unusual the Dems will lose the House this time around. Just historically that has been the situation, but combine the economic woes of the US and the Hispanic population leaving the Dem party in droves is not a harbinger of good things to come for the Dems in 2022 in the House.  The line now is a pass for me.

The Republicans are a 73/30 to win the Senate this year. That is too high as far as I see it. The Senate is a bit different in that the establishment Republican’s seem hell bent on making sure their base stays home. I view McConnell as one of the most destructive forces of all time for everyday Americans. He is probably the best argument for term limits you will ever see. But saying that 73/30 is way too high. My view would be something like 55/45. And with 14 establishment Republicans ushering in Red flag laws make no mistake that 73/30 is delusional.

You also have the added variable of whether Trump gets indicted before 2022 as a result of the Jan 6 committee.  That of course can cut both ways. But, in as much as establishment Republicans have contributed to this , it would just be another reason for the base to stay home.

DeSantis 89/11. it should be something like 99/1:) They have their ducks in order conducting their elections. So that removes one variable from the equation. And the cross over vote will be substantial. I would lay the 9 to 1 and sleep very well at night.

Trump losing GOP primary poll by July 17 is 98/2 against. And that line is spot on. Whether the establishment likes it or not, the base is solidly in his corner. Probably the most one sided support any politicians has gotten in my life time. But again that does not mean he is going to run. There are a number of other considerations that one can make a reasonable assumption he will not run.

Which party will win the Florida Senate Race  Republicans 92 to 7. Which means Rubio who is running virtually unopposed in the primary will be given another six years. My prediction is like Graham, it will be only days until he is back to form as a Trump hating , base hating establishment Republican. Lets look back in 8 months and see who close this prediction gets.

Trump indicted by Sept 1st is 85 to 15 against. I assume that is a federal indictment. If it were 10/31 I would be inclined to take the 8.5 to 1. But even 9/1 at that price has value. With this DOJ and an almost certain referral to the DOJ for prosecution it would take a miracle (like Trump agreeing not to run) to ward off an indictment.

Murkowski to be reelected 70/30 in favor. I have to admit this line mystifies me. If there was ever a candidate you would think would be toast this time around it would be Murkowski for many reasons. But I most likely will take my lumps and take the 30 to 70.   This is like looking at an NFL line that looks like a cinch, and you know how those typically turn out.

Nevada governor race 52/47 Dems.  This line has dropped from 65/35 primarily because all the establishment Republicans won their primary. Voter fraud is being alleged with investigations starting. But, the risk now is the base stays home, as reflected in the line. If there is one thing the base dislikes as much as the progressive left its the establishment side of the Republican party. The Dems could have moved to the center and picked up many of these voters but they choose the road to attack them instead. A political error.  So you have an instance where both Republicans and Democrats are taking strategies that are far less then optimal. One could argue they are both self destructive.

Cheney House GOP Nominee 90 to 10 against winning the primary. They say there are only two certain things in life, death and taxes. But I would add a third. Chaney losing the primary.  They could get 10,000 mules and it would not help her. Her last hope was the Dems registering in the republican primary to vote her in, but her statement on Roe closed that road. Her and Kinzinger will be off vacationing together after Jan 1st:)

There are many other interesting races and will become more interesting as we get closer to November.  I plan on updating this at least once a week now.

Also note, any comments I make do not necessarily reflect any particular view I have on any issue. For the most part I am apolitical. Lean libertarian, and practice a live and let live approach to life in general. I approach political odds like I approach investing in the markets and handicapping sports. Purely analytical.  And for me me that includes quantifying what is typically unquantifiable. That is my strong suit.

Of course I am not always correct in my assessments. But the test is more likely than not. And when you gamble if your laying 11 to 10 the break even mark is 52.4%. That is why I like to make private wagers rather then use the books when I can find someone who likes the other side.

But unlike sports betting the overlays tend to be much higher when you can find them.

Hope you enjoyed this update. I am always open to questions or comments via this site or email to [email protected]

Or I have a special not where MLB is free for the season.  First time in 20 years I have did this, as I am using a new data base for my handicapping.

So far on my Overnight Sides in MLB Season to date is:

So the new data base is working out well. You can sign on for free access by sending my an email to [email protected] and I will add you to the email list and also my slack channels.

That will be free until the first game of NCAA FB, when I go back to a subscription service.