Short put sales are now 93.23% winners with a profit factor of 4.67!!! My morning missive and other thoughts on the markets for Wedn Morning

By RICKJ
January 20, 2021
Markets are gapping up this morning with the exception of IWM which is hovering around Break-Even QQQ is leading the way to the upside up almost 1%
Vix.x -4.52% crude +1% and TLT -1/3%
This is a positive pre-market bias
The big news today is the transition takes place with Trump gone and Biden in
For a country that prides itself on the peaceful transition of power 40,000+ troops in DC and the city locked uptight is not a good sign
If I had to guess, there will be no major violence but a few peace full demonstrations scattered across the country. Let’s see how close I get
It appears the markets are looking at it this way also
So, I do not think there is a political risk today in the markets. What I do think is the Biden administration policies are going to set the tone for the markets in the first 100 days.
Watch closely what shifts and reversals there are as this will affect many areas of the market.
Just the shutting down of the keystone pipeline will have oil prices on the move to the upside. There are many more examples like this. If you are awake you can take advantage of these
The heading back into the Paris Climate accord is going to take a big toll on the economy.
It’s one thing to have a large national debt when GDP is growing with new jobs being created and another when the GDP is in decline.
America cannot afford a reversal in the GDP gains of the last 4 years. It will likely lead to some very bad economic conditions in the US if the drain on the GDP is as large as I think it will be
The U.S. was well-positioned after 4 years as one of the world’s biggest oil exporters. This alone would be a safety valve to the growing national debt. Take that away and there are no safety valves.
If the Biden administration goes after the fossil fuel industry America is in big trouble economically.
But all this is what if:)   All one can do is watch and react with your investment strategy
One stock I am watching to short is Twitter 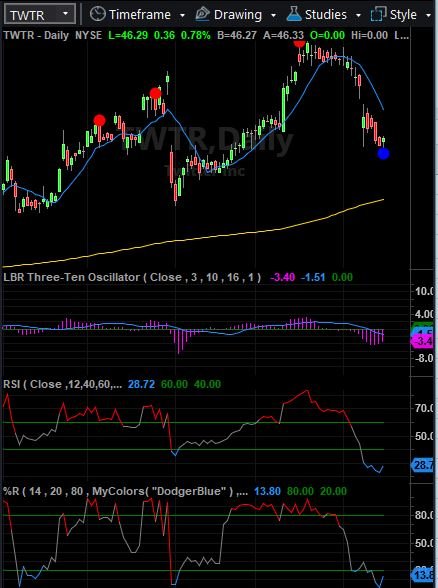 I would be looking to short at a 50% retracement if we get it
If you are aggressive you could trade at the retracement back to the 10 day MA
My guess is by the end of the year the stock will break the 200 day MA convincingly. The stock is overvalued as it is. But with the decisions, it made this election season its name brand among half of America has gone to 0.
Considering there are many other alternative sites if you are a social media poster, I do not see twitter a good investment
This is probably the best long term trade I can see right now in the markets. But the fall has been swift and a sell on a rebound would be a conservative way to approach the trade
There are other opportunities like this. But this one is the most obvious 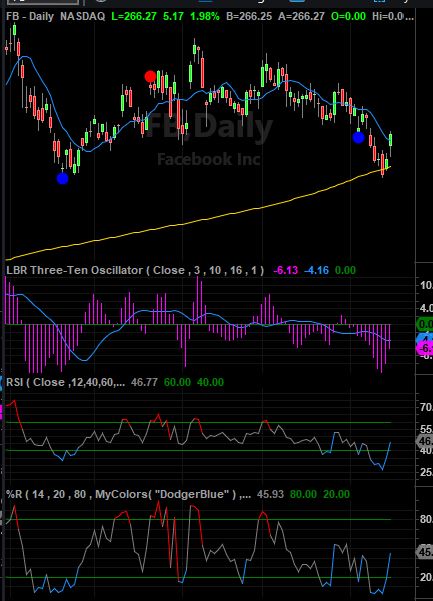 Facebook is another although it’s not as obvious as Twitter at least from a logical standpoint.
But it just touched the 200 day MA a few days ago and is bouncing off it now. This is another stock to watch to short for a longer-term hold
Let me add one thing as to the capital violence we saw on the 6th. Violence is never the answer. Violence begets more violence.
The entire foundation of society is peaceful protests if you disagree with something. Or get out and vote. This idea that violence is going to change anything is plain wrong. All it does is make things much worse.
From an investing standpoint, widespread violence causes havoc on the markets. Not only from the violence itself but the reaction to the violence, as we will soon see.
Looking over my short put and call sales this morning, all look fine. Not much to manage right now. I am scouring for more income trades as those right now are solid income producers while we are doing our other trading.
Mean reversion right now is not in play as the markets are not oversold.
We are at a place today where we have a number of longer-term income trades, no mean reversion trades, and a handful of short put and short call trades,
Tomorrow is short put sale day:)  I will be scanning for candidates after the close today. These have been as solid as you will find in a  trading method. 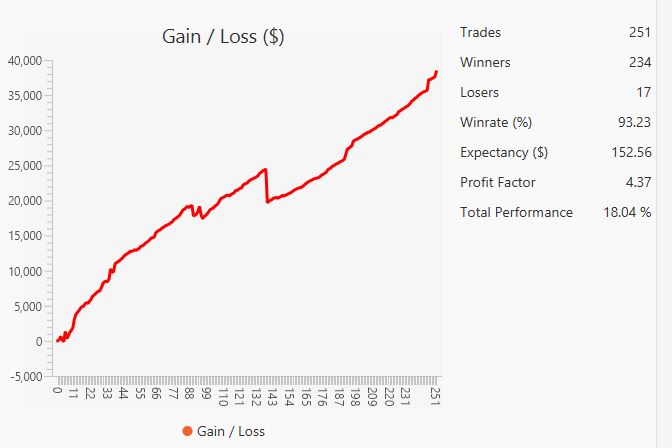 We are up to 251 trades with 234 winners and 17 losers.
That is a 93.23% win rate and a profit factor of 4.67.
These are only the short put trades made on Thursday for the 2-day hold.
I will be around most of this morning if anyone has any questions.
This is my morning comments this morning to subscribers of RickJ’s Sports Plays. I added my trades as a value-added
addition to my sports handicapping service, as I have found many serious sports bettors also trade the markets.
I have been doing this now for almost a year now with my morning remarks, along with sending out most of my trades I make via slack.
I will have more on my trading techniques later but they fall into a few categories: 1. Income trades via discounted CEFs 2. Mean reversion trades 3. Income trades via short puts and short calls 4. swing trades

Short put sales are now 93.23% winners with a profit factor of 4.67!!! My morning missive and other thoughts on the markets for Wedn Morning2021-01-202021-01-20https://www.rickjshandicappingpicks.com/wp-content/uploads/2016/08/ricklogo.pngRickj's Handicapping Pickshttps://www.rickjshandicappingpicks.com/wp-content/uploads/2016/08/ricklogo.png200px200px
About
RICKJ
This is author biographical info, that can be used to tell more about you, your iterests, background and experience. You can change it on Admin > Users > Your Profile > Biographical Info page."

RickJ's Handicapping Picks  The latest in positive EV handicapping Techniques Overnight Plays in MLB are sent out around 3 to 4 PM PST the day before Come join us for a fun and profitable Pro Sports season!!!
Sign up now for our newsletter with handicapping tips
Close
Posting....
A 2-0 day in college hoops Wednesday, free week free access to my slack trading account, Short put option sale. My thoughts for a Thursday morningCollege Basketball, INVESTING
Superbowl Sunday, my analysis, my value added services to my service. My thoughts for a Sunday morningCollege Basketball, INVESTING, NBA, NFL, NHL