I woke up this morning and the first tweet I came across was this one:

Flu this season in the U.S.

And yet flu does not qualify for the technical definition of an epidemic as The % of the population is 7.1% and has to be over 7.3%

Next Gang-related deaths:
2,000 a year
Almost 50% of these come from LA and Chicago.

Illegal immigration in the U.S.

The CDC updates its death totals every day, Monday through Friday. So we will get a new death total from the Corona Virus tomorrow. I am still sticking with my prediction of fewer than 200 thirty days from now.

An excellent article I read this morning on this:

The media and some politicians report every death that occurs from the Corona Virus. Each and everyone makes front-page news. But the others related to things far worse are not reported.

You would think that every time an illegal raped or murdered someone this would be front-page news. Or human trafficking arrests. But no, crickets.

And then I see the headline yesterday that Trish Regan was suspended from Fox News, for essentially telling Americans the same statistics that you are seeing here. In other words, Fox News is now censoring the Truth.

A logical person would ask who had no real insight into what was going on, why is something as bizarre as this happening? I mean 41 deaths? And the media has intentionally turned Americans panic-stricken?

Well the MO has not changed. It’s the get Trump MO. First, it was 24/7 to get trump on Russia, Russia, Russia. With the news being fake news, and now we find out they knew it was fake within a week of the Mueller probe starting. Then it was Ukraine. Mysteriously, Schiff met with a future fake whistleblower, then Atkinson changes the whistleblower requirements, and Voila A Whistleblower complaint, a star chamber, and impeachment.

She said the exact same thing, and they immediately benched her. She was not on board with their program of destroying The economy to get Trump.

Moving on a bit:) I listened to Collins give her press conference yesterday and I immediately went to wager against her for her Senate bid. She has severely reduced the chance she has of winning her Maine Senate seat. I thought I might get some odds on this wager as she is a 5 term incumbent, and was ready to take the wager at even money. But the line has moved now to 3/2 against her. So I passed, for now.

Republicans will never learn. Bashing Trump is the surest way to lose you can find. Mia Love is the perfect example. I actually liked Mia Love. Young, intelligent, quick-witted. I thought she had a real future. But then she started bashing Trump. And what do you know, she lost her House seat.

Unfortunately, Maine and the RNC are not smart enough to recognize this and put someone in the Primary that might have a better chance. But they will be content to lose a Senate seat to the Dems.

Notice Clinton is creeping up a bit.

My wager against Sanders is looking solid, and I have bought it back for about a 50% profit. I still have left a small wager on Clinton and Bloomberg. My win on Sanders gives me a freeroll on the other two and then some:) Clinton I was getting something like 20 to 1 odds.

I view that wager as like betting on a fixed prize fight. If it’s fixed, then Clinton can get it. If not I will lose a small amount.

Right now it’s pretty much a tossup. I like Trump at a tossup.

Control of the Presidency: Dems just a hair about 50%
That has come down from 55/45 Republicans.

Again I believe the value is in the Republicans

74/26 Democrats:
I like the Republicans here. I rate it a tossup whether they regain the House.

I do not think there is a lot of value in the Republicans here. Collins, in my opinion, is DOA in Maine, although Alabama is a certain pickup. Which gets back to 53. If the Republicans were united behind Trump, I would say they would pick up seats. But, they are fractured, and as usual, are trying their best to turn a solid winner into a loser.

Collins is the perfect example. But there are others. MAGA is not organized enough to get solid candidates in place in key races, so you have the establishment RNC sticking with establishment choices. In a year where populism reigns the Republicans refuse to change gears. This will cost them in November. Now, Trump could well pull them through as he did in 2016 and 2018.

The gained seats in the Senate in an off-election year. Historically that does not happen. The only one to give credit to is Trump, who had rallies every week.

One new bet I am looking at is you can get 5 to 2 on a recession happening during Trump’s first term. The definition of a recession under the wager is two consecutive quarters with a negative annual growth rate in real GDP. This is put out quarterly and the first quarter is not in. So under that definition, you could have a real GDP at 4%. And if it drops 1/10th of a percent two quarters in a row that would be a recession. But GDP would still be over 3.5%

With the Corona Virus and the manic reaction, I expect the growth rate to slow. But I do not consider the U.S. to be in a recession. A better measure is BCI or what is called the business cycle index.

Here is a photo of what I am talking about : 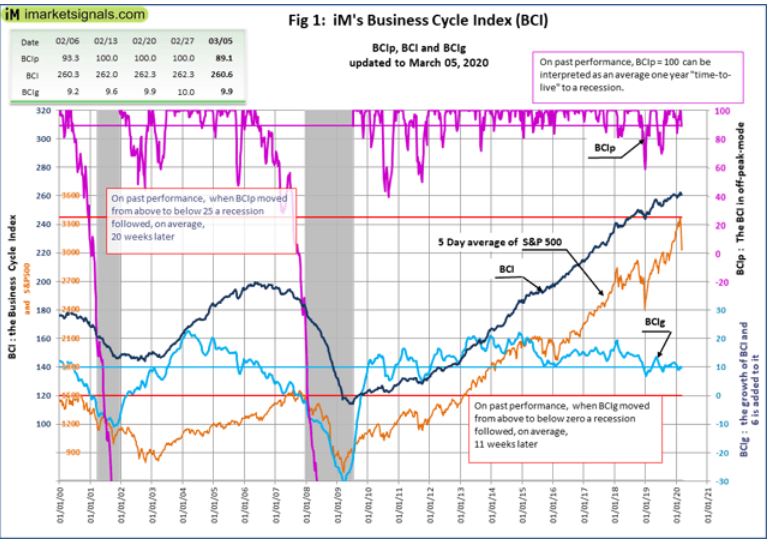 This is a more realistic definition of a recession. If this were the criteria I would take the wager in a heartbeat. But with the definition they have, I am staying away from it.

Using this the odds of a recession before the end of Trump’s term are less than 50%. Right now we are nowhere near recession territory.

No matter what happens the media will be saying we are in a recession and it is all Trump’s fault. I wish there was a betting line on that:)

That is it for Sunday.

Sunday Corona Virus stats, Trish Regan, Susan Collins, updated political odds. My thoughts for a Sunday2020-03-152020-03-15https://www.rickjshandicappingpicks.com/wp-content/uploads/2016/08/ricklogo.pngRickj's Handicapping Pickshttps://www.rickjshandicappingpicks.com/wp-content/uploads/2016/08/ricklogo.png200px200px
About
RICKJ
This is author biographical info, that can be used to tell more about you, your iterests, background and experience. You can change it on Admin > Users > Your Profile > Biographical Info page."

My take on the Corona Virus for March 14th. Some thoughts for a Saturday afternoon:)INVESTING
Markets in panic mode, Coronavirus deaths in US a whopping 65 at last count, Trish Regan, a tip from Rudyard Kipling and George Orwell. My thoughts for a bright Monday morningINVESTING