For a good perspective on the market its always a good idea to take a look at the stock chart from last week: 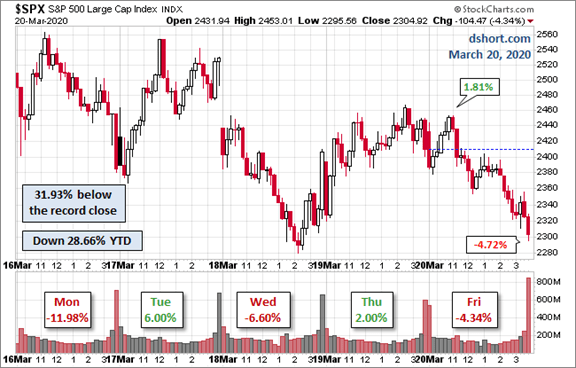 As you can see the market closed on the lows for the week.

In addition the total drawdown since 2009: 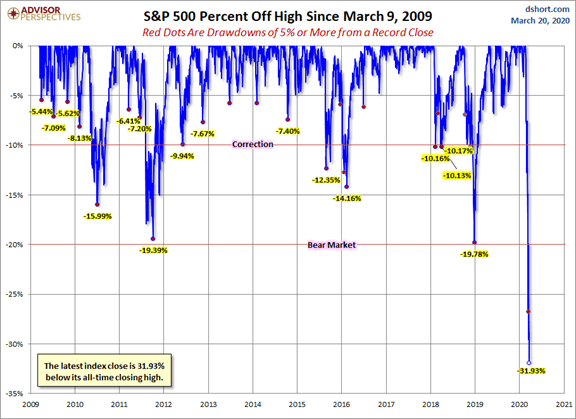 We are at a 32% drawdown from the highs and in record time. It seems like it was just yesterday that the markets were making new highs every day. The problem is the Coronavirus is still here, but there are encouraging signs if you get past the media hysteria.

I will say this again as it is important. Do not get your information from the mainstream media. Most of it is false, including now Fox News who oftentimes repeats stories without independent verification.

So, many times you have a story begin with an anonymous source. And everyone else picks it up to where it’s repeated so many times people think it is true. When in reality most of the time it is not. The best recent example was the Bolton transcript. Now no one had read the transcript even the NYT reporter that wrote the article. But then every other news agency picked it up and before you know it, Bolton has the goods on Trump:)

See how that goes. Then later Bolton comes forward and says much of what he said regarding his book was just hype to get it sold. So, in reality, all we had was fake news.

The same thing is happening with the corona virus.

Lets take a look at what Trish Regan said in early march:

That was her last broadcast. She was taken off the air. That it what the mainstream media is doing now. If you do not go with their narrative you are off the air. One by one the commentators at Fox are falling into line.

This is dangerous because many in America rely on the media. I learned long ago this was a big mistake.

This also can be seen in the fake news indicating that Trump’s messaging about hope is dangerous and that he should be taken off the air. Since when did the press determine what the President should do or not do? But more importantly, we see that Trump is spot on as to the various drugs he is suggest has promise.

Hydroxycholoroquine is a derivative of chloroquine and they give that for a week along with the drug Azithromicin.

Both have been around forever, and both studied to the nth degree. 600 MG and 200 MG, respectively.

In addition, countries that still have malaria to deal with, who take an antimalaria drug, are doing better than other countries that are not. The thought is the Anti-malaria drug is helping control the outbreak of the virus.

But even with that many Drs. in the U.S. are using these two drugs with success. So, Trump is correct it is promising. Why would anyone want to push an agenda that might kill people and convince them not to take these drugs if the Dr. suggests it???

Its time to go back to Trish Regan’s last broadcast. She explains it all.

And it goes on and on. Every issue that comes up is turned around against the President. From the naming of the virus (even the Chinese at first called it the Wuhan virus) to every little fact. Most of which have been twisted and are false.

As Trish said it is not different than the Russia Russa Russia hoax, or the Ukraine hoax. It is all part and parcel orchestrated to try to beat Trump in 2020.

This is very damaging to the country both in terms of the psychological health of Americans and the stock market. Much of the market’s losses are because of the false reporting by the media. They have created a climate of hysteria and panic.

Panic is the ultimate destroyer. It takes away your ability to reason, to think clearly. Panic has to be avoided at all costs regardless of the situation. Panic never helps.

You learn that during flight training. Every pilot at one time or another gets into some dicey situations. Some by pilot error and some just by random chance.

What is taught over and over, if you find yourself in one of these situations, the last thing you want to do is panic. Chances of survival go down geometrically if you lose it.

On the internet, you hear many people say what if this or what if that. You deal with it. It is that simple. However, The total deaths according to the CDC is 201 as of Friday’s reporting. The hysteria level we are seeing now you would think it was well over 100,000.

With the death total so low in the U.S. and the promising drugs ready to treat it the future is very encouraging. My guess is everyone is back to work no later than 30 days from now. If not much sooner. These medications are widely available and are cheap. In addition, the stats show that those that catch the virus have very mild symptoms. Some do not even know they have it.

The only reason this has become such a hysterical event is the media as the facts do not support anything to worry about. Over 60,000 people in the U.S. are expected to die of the ordinary flu. Yet no one gives it a thought. Not only that much of the population does not take flu shots.

So tough it up, and let’s get things going again. Forget this fake hysteria in the media. 99.9% of what you are hearing from them is false. Just like almost 100% of what they reported on Russia and Ukraine was false. The U.S. media has become hijacked!!!

If you are itching to trade, I would forgo swing trading right now. There is no way you can keep trades on overnight when you have gaps of 500 pts staring at you. Day trading is fine if you have an established record.

Right now almost all I am doing is selling short puts on Thursday for Friday expiration. The premiums are so high right now you can get annualized returns of almost 1000 % with very little risk. But it requires some very stringent rules.

I outlined them in my last post. If you have an interest go over that post again. The key is in the options screener you use. I have several but my parameters are ones that I have come up with myself.

I took six trades on Thursday, all six were winners, and 5 of the six stocks actually closed up on the day when the market was off almost 5%:)

That is what I am concentrating on until volatility settles down. I send these out to my sports subscribers. All of their subscriptions are on pause until MLB starts but they still get the trades as I make them as part of my service.

You can Take advantage of this by:

1. Go to rickjshandicappingpicks.com
2. Use the Paypal dropdown menu and pick the monthly subscription (they have 3 day free trials)
3. I will add you to the lists and then pause your subscription until MLB starts. But you will get these trades.

Then when the subscription starts you will have the 3-day trial and can decide if you wish to continue. In reality, it’s free for now.

Now let’s take a look at the political odds:

Nothing has changed. But I am still skeptical Biden will be the nominee.

Right now a tossup. I like Trump at a tossup.

Again I believe the value is in the Republicans

I like the Republicans here. I rate it a tossup whether they regain the House.
Although the better wager is to bet against each of the “dirty 30”

That is a large drop in this category. I still am laying off this wager. The Senate Republicans seem to be trying to lose. Collins, Graham are both taking positions that could cost them in November. But the line is getting to an area that is attractive.

Then numbers I see this weekend still to me make it close whether the U.S. will fall into a recession. Getting 4 to 1 gives me a nice cushion on the wager.

One wager I am watching for is Collins vs Loeffler. I want to get down on Collins. I liked him before Loeffler imploded with her stock trades, but now the price might be too high. Anything close to even money would be a gift.

Corona virus day trading election betting odds
Weekly recap of the markets, Trish Regan, Panic, Promising corona virus treatment, Updated political odds. My thoughts for a Sunday2020-03-222020-03-22https://www.rickjshandicappingpicks.com/wp-content/uploads/2016/08/ricklogo.pngRickj's Handicapping Pickshttps://www.rickjshandicappingpicks.com/wp-content/uploads/2016/08/ricklogo.png200px200px
About
RICKJ
This is author biographical info, that can be used to tell more about you, your iterests, background and experience. You can change it on Admin > Users > Your Profile > Biographical Info page."

RickJ's Handicapping Picks  The latest in positive EV handicapping Techniques Overnight Plays in MLB are sent out around 3 to 4 PM PST the day before Come join us for a fun and profitable Pro Sports season!!!
Sign up now for the service. Its free until NCAA FB starts.
Close
Stock market hanging tough, my short put trades, lawmakers do the unthinkable, coronavirus treatment, Updated political odds My thoughts for a FridayINVESTING
Monster Stock Rally, Coronavirus fears, media induced panic, A real experts thoughts, Updated political odds. My thoughts for WednesdayINVESTING